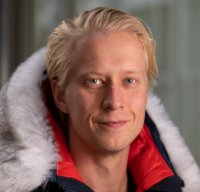 Ilkka Matero is the newest addition to the SIOS-KC team since the first of June. He joined in the role of a Scientific Data Programmer and will be assisting in developing and managing the data flow between the various research infrastructure around Svalbard and the observing system.

Ilkka did his PhD studies on palaeoclimatology at the University of Leeds, and before joining SIOS-KC he studied sea ice as a postdoc at the Alfred Wegener Institute in Bremerhaven, Germany.

I’ve been studying the cryosphere and climate using different tools including a combined total of a year being moored into drifting ice in the Arctic. Most recently, I’ve been modelling biogeochemical processes in sea ice after doing my PhD modelling the flow and climate impacts of continental ice sheets. I’ve come to understand that the amount of data that can be produced in a single campaign or project can be huge, and parts of these datasets can end up not being utilized to their full potential. The interdisciplinary approach of SIOS will allow for the different datasets to combine into something bigger than just the sum of their components, and it will be cool to be a part of it.